It’s hard to believe that it’s been over a month since my trek to California for the ASCD Conference (and four fun site visits!) in late March. My first stop was in Santa Ana. There I visited Stephanie Carey’s fourth grade class at Wilson Elementary. It was a beautiful, sunny day in California, absolutely perfect for a walk!

This is Ms. Carey’s first year incorporating The Walking Classroom, as she received her class set in August of 2016. Like many of our adopters, she had heard about the program from a fellow teacher in the district. Interestingly, it was the teacher whose classroom I would visit later that same day!

Checking in to the Classroom I arrived first thing in the morning for our planned 8:30 a.m. walk. As I approached the building, I was visually greeted by a large mural of a road runner (more on that later!) emblazoned on the white school building’s exterior.

Upon my entry, my second greeting came in the form of a welcome from the school’s principal, Ligia Hallstrom. She then quickly escorted me to Ms. Carey’s classroom.

The students were nearly ready to walk once I reached the classroom, and so was I! I pulled my earbuds from my pocket, and I borrowed a spare Program 4 WalkKit. Next, we headed out the door. Our journey around the exterior of school took us to the playground and a large field around which the students take their walks. We were joined on our expedition by the school’s technology teacher and a member of the district’s media staff, who chronicled our experience in photos and video! The students moved quickly while we listened to “Layers of the Earth” (4-#74, Combined-#133). They circled the field and playground several times before the podcast was through.

As they finished listening, they removed their earbuds and moved to where they would line up to go back into the building, discussing the podcast with Ms. Carey or among themselves.

Some Time to Talk

Following the walk, the students returned to the classroom, where their chromebooks were queued up to a video they could independently watch. After watching it, they completed the electronic version of the comprehension quiz.

Once the students finished these activities, we had time for a brief chat and some Q and A! The students shared that they normally walk on Wednesdays, but that they had made the change to Thursday to accommodate my visit. They also told me that Ms. Carey always chooses a podcast that links to what they are learning in class. Having listened to many podcasts over the six months they’d been in school, Ms. Carey’s class shared that their favorite Program 4 podcasts include the following:

Part of the Santa Ana Unified School District, Wilson Elementary has a mission to prepare all students for success in college and in their future careers. It is named after the 28th president of the United States, Thomas Woodrow Wilson (coincidentally, the only U.S. President to earn a Ph.D.!) Students are visually reminded about higher education. Each classroom has a particular college, often the teacher’s alma mater, represented by a pennant and recognized on a bulletin board with images from the college or photos of the teacher graduating.

The school mascot is the roadrunner (hence the mural) and the students are known as “Roadrunner Scholars”! From my walk with them, I can see that these students are on the move!

I wrapped up my visit to Wilson Elementary with some group photos and my personal favorite, the creation of a video message from Ms. Carey and her students for The Walking Classroom’s creator Laura Fenn. I shared some parting gifts, and then, it was “Happy Trails” for me!

Check back in two weeks for the next installment in Fun from the Field, for more news, photos, and highlights from our site visits! 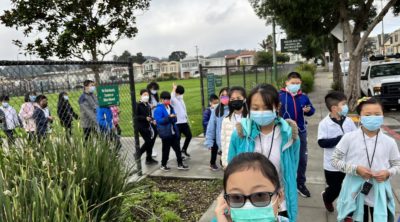